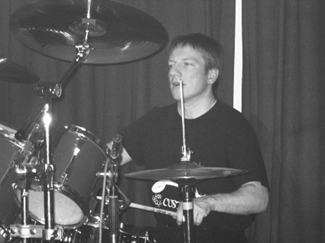 His musical beginnings were on the piano, but when he was caught hitting the keyboard with his mother's knitting needles at the age of twelve, it was decided that he should change to drums!

He had his first public performance at 15 with the Dortmund German rock band Evil Passion. Other performances followed around Dortmund and Wolfram quickly knew how to use his versatility to give each piece his own individual touch.

In 1986 Wolfram followed his brother Matthias Schaaf and since then has swung his drumsticks in the Dortmund blues-rock group Cheap Tequila, which along with numerous tours throughout Germany has also done three recordings.

Highlight to date - besides performing with the Rolling Blues Boys - was acting as support gig for Ana Popovic during her Germany tour in 2006/ 2007 and Snow White.